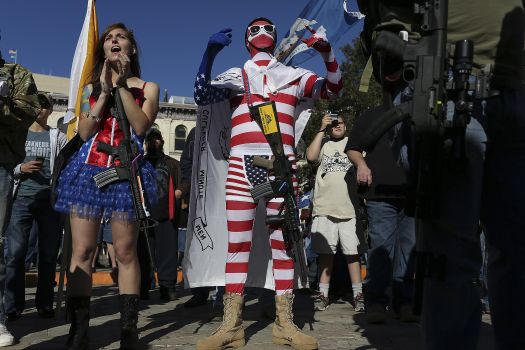 Open Carry -a divisive subject if we’ve ever come across one. In today’s op-ed, Hernandez weighs in. We know not everyone will agree (not all of us agree on any given subject unless it’s about terrorists being shot in the face) and by all means, you’re allowed to express your dissent. Just try not to needlessly inject too much invective. We welcome discussion, skepticism and outright disagreement. Just don’t be a dick about it.  Mad Duo

Last July, a man walked into an Austin, Texas hotel lobby with a rifle. Someone called the police. At that point, he was a law-abiding open carrier. Two minutes later the police received another call. The man had killed an innocent taxi driver.

I know what OC advocates are thinking: “It’s terrible that someone called the police on a citizen lawfully exercising his 2nd Amendment rights. They had no reason to call the police until he started shooting.”

This past Halloween, an innocent citizen exercised his 2nd Amendment rights by openly carrying an AR-15 down a quiet street and into a building in Colorado Springs (he also had a gasoline can). This wasn’t normal in Colorado Springs; OCing a rifle has never been a normal act in American society. We don’t have a tradition of walking around the neighborhood, mall, supermarket or school with a long gun. We arm up in times of crisis, and in some rural areas people carry rifles for specific reasons, but we don’t walk around with rifles “just because”.

The open carrier in Colorado Springs caught peoples’ attention. Someone called the police. A dispatcher explained that OC is legal in Colorado, and if the man was simply exercising his OC rights nothing could be done. However, since he had walked into a building with the rifle and a gas can, maybe he was committing a burglary. She assigned the call to patrol, but at a low priority; the worry was about a possible burglary, not about the openly-carried rifle.

Other, higher-priority calls were dispatched first. From a strictly legal standpoint, that makes sense; the man wasn’t breaking any laws. OC activists, I’m sure, would bristle at the suggestion that police should have been sent at all. Those activists have long maintained that a law-abiding citizen legally carrying a rifle presents no threat whatsoever to the public.

Ten minutes later, the person who originally called 911 called back. The innocent OCer had killed a bicyclist who happened to ride into the area. The open carrier then walked half a mile down the street and killed a woman on the front porch of a house. Another woman opened the door to see what was going on. The man killed her too. Police arrived minutes later and shot the man.

But until he actually started shooting people, he was a law-abiding open carrier.

A few months ago a domestic terrorist killed three people, including a police officer, in an attack on a Planned Parenthood clinic. We don’t have many details of how the attack played out, but we do know the man had a rifle. I have to assume that at some point the man walked through a public area with his rifle before he started shooting.

OCers might argue that nobody should call the police on a man with a rifle walking toward a Planned Parenthood clinic, because until he raises his weapon and shoots at someone he’s no threat. Well, I call bullshit on that.

Most 2nd Amendment advocates oppose “exercising our rights” in a way intended to scare the public. Many see rifle OC as unnecessary, provocative, self-defeating, confrontational, and just stupid. I and some other 2A advocates react to rifle OC with disgust, because it creates enemies and convinces the undecided that all gun owners are dangerous lunatics. I see a logical contradiction inherent to rifle OC and its practitioners: “Rifle OC isn’t a threat at all” versus “rifle OC is a message to the government that we can fight back”. Open Carry lunacy is the hallmark of gun-rights extremists, and within the gun right community OC activists are widely disliked (and insulted, and mocked, and caricatured).

Now that we live in an age of terrorism, this isn’t just a matter of poor taste. We have multiple organizations, including ISIS, planning, encouraging and celebrating mass shooting attacks. 130 innocent people slaughtered in Paris prove what an organized mass shooting attack can do.

In light of this threat, do OCers still advocate carrying a rifle in public as a form of protest?

There is such thing as a peaceful OC rally where gun owners safely carry rifles slung across their backs. Then there are belligerent OCers walking around with rifles up front in combat-ready holds. There was the Arizona doctor who walked into an airport with an AR-15 to make a point (that point being, “even doctors can be total morons who do ridiculously stupid things”). Another brave OCer carried an AR-15, with a hundred-round drum no less, into an airport to drop off his daughter. Those OCers carry just to get a reaction, then yell “help help, I’m being repressed!” when they get the police response they wanted. They carry in a way that allows them to immediately shoot someone and then argue that the way they carry poses no threat.

But those of us with training can go from this: 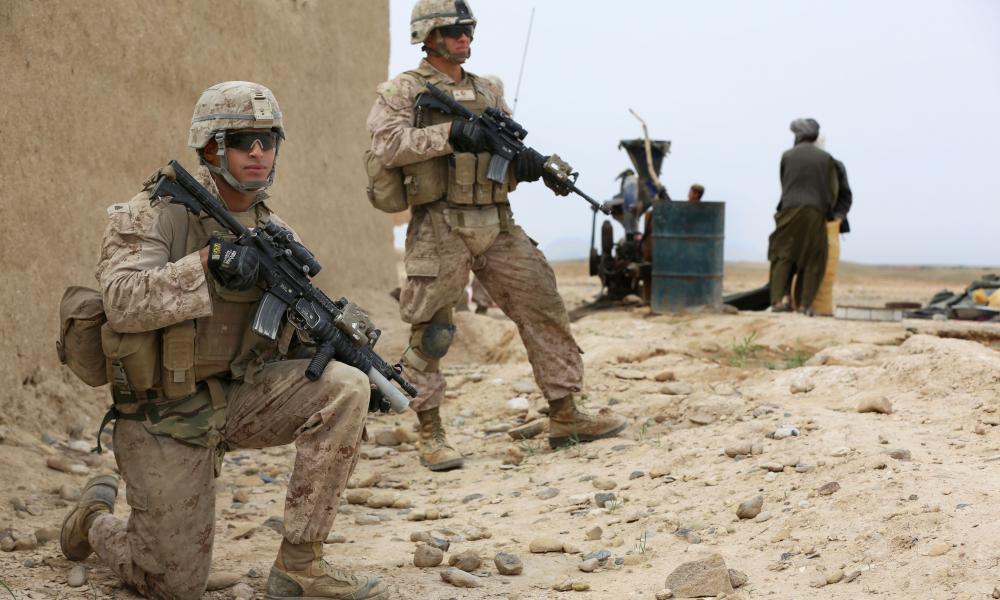 to putting rounds on target: 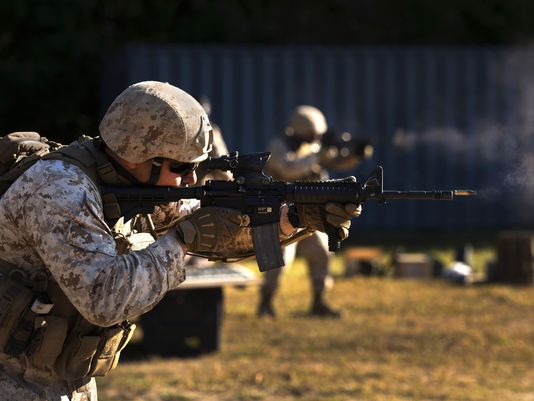 in less than a second. The fact that OCers appear to not know this just proves they’re untrained in addition to having bad judgment. 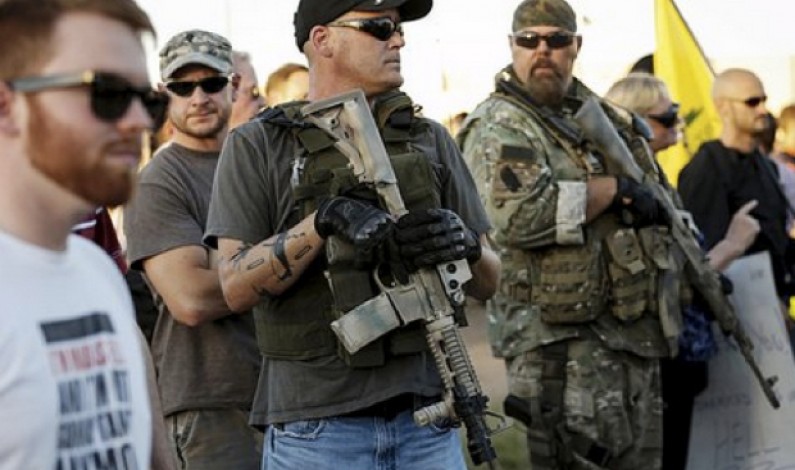 OCing a rifle in a combat-ready hold is no different than carrying a pistol out of the holster. It’s no different than holding an axe over your head, ready to swing. It’s a threat of imminent use. OCers can’t argue they’re brave anti-government warriors showing their willingness to shoot it out with police, then say walking around with a rifle is harmless.

So let’s call it what it is.

Rifle OC is fucking stupid. It’s not done to keep the peace, it’s done to get attention and create confrontations. And those of us with actual training and experience, especially those of us who carry concealed pistols to defend ourselves, our families and innocent people around us, have to react when we see someone carrying a rifle ready to engage in public. For those of us with a sworn duty to protect the public, OC creates even more problems. This isn’t about police overreaction; after aaallll the mass shootings we’ve had in America, and after the horrors of the Paris attack, any police officer who ignores Random Guy Walking Down The Street With A Rifle is guilty of criminal negligence.

So cut it out, open carriers. OC a pistol if you must (that’s not such a good idea either, but relatively speaking it’s the difference between gonorrhea and syphilis). But leave the rifles at home. Rifle OC doesn’t show us freedom-hating cops that the citizens are armed and capable of resisting tyranny; we already know that. We’re usually criticized for acting like everyone’s armed, not like nobody’s armed. You and your rifle don’t do anything except make yourselves look like self-centered assholes.

Now that we’ve seen, over and over, what kind of damage a murderer with a rifle can cause, we sane 2A advocates have a responsibility. If we want to maintain 2nd Amendment freedoms for ourselves, children and grandchildren, we need to oppose the mindless stupidity personified by OC activism. Scaring the public with rifles isn’t exactly the best way to show why we citizens should own ARs and AKs. The Founding Fathers recognized the right to bear arms for a reason: they didn’t want American citizens to fight tyranny with pitchforks against cannon, as so often happened in Europe. It’s safe to say they didn’t want a bunch of untrained dipshits swaggering around town showing the world they could massacre everyone around if they feel like it.

So next time some OC activist/anti-tyranny warrior thinks he’s defending freedom by waving an AK in your family’s face, those of us who support the 2A and have brains should tell them that fellow innocent open carriers have already committed murders. We should point out the feelings of rapturous joy that mass shootings bring to our sworn enemies. And then we should tell those brave open carriers to quit being such idiots and put their rifles away. 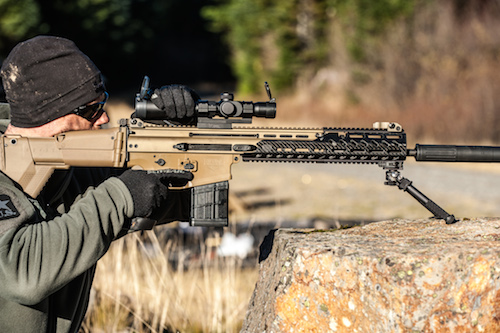 The M-LOK revolution is here. 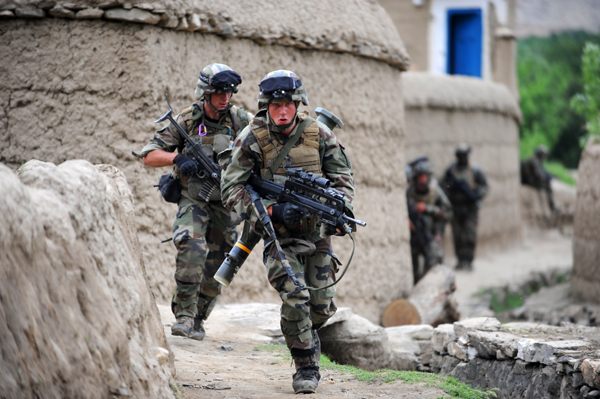 The truth about the French Army Pt III: The French Don’t Run

Combat-Veteran Cops: To Blame for the Baltimore Riots?

119 thoughts on “Open Carry: There Are No More Excuses For It”