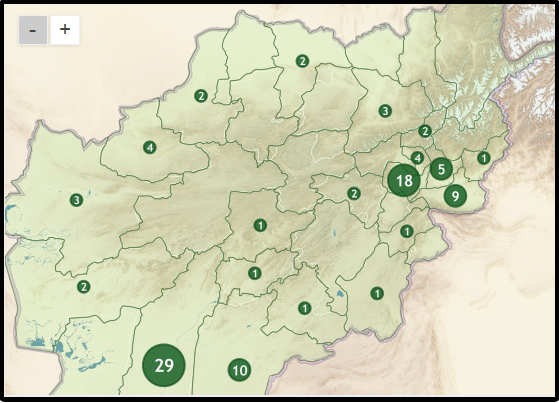 The number of attacks on Coalition troops (particularly US personnel) by allegedly "friendly" Afghan police and military personnel is garnering more and more attention lately – for instance the recent so-called "green-on-blue incident" that took the lives of advisors who had been invited for a meal and discussion (during Ramadan) and were then ambushed by their host, followed shortly thereafter by another shooting that killed three more ISAF personnel.

There was another attack on Coalition troops today, although ISAF advises there were no fatalities.

It's an effective tactic. Much like the sniper maxim, 'Kill One Man Terrify a Thousand" this works to sew additional dissension and mistrust. Let's face it, it's a brilliant force multiplier. Most of our guys don't have too high an opinion of the locals anyway (drug use, pedophilia and lack of military bearing will do that to you) and now they have to keep an eye on 'em to make sure no one goes apeshit during a patrol or even on "down time". As if squatting in a TCN shitter and dealing with harassing fire/rockets/mortars/IEDs wasn't bad enough.

The 'live' map (that's a screen shot above) from this "Rapid Mapping Page" by the New America Foundation is a resource to track such attacks. It appears to be updated quickly (the hows and whys of it explained on the page) and you can click in for furthr details, though the numbers it posts aren't always consistent with the text in the explanation (such as the attack today in Nangarhar Province). Obviously there's no way for us to vet everything they post, but so far it appears to be accurate.

Unfortunately this won't do anything to help our boys and girls there doing the job, but who knows maybe tracking this sort of information will help prevent such attacks (or respond to them) in the future.

It's fucking ridiculous and there probably isn't much to be done about it. As long as we've got boots on the ground they'll be exposed to these assholes at every turn.

More on the "green-on-blue" attacks: http://www.longwarjournal.org/threat-matrix/archives/2012/08/three_more_isaf_soldiers_kille.php

Normally we'd say 'Mad Duo Clear' but in this case we'll just say "You guys watch your back over there."

Don't forget, we're constantly pontificating on Facebook. Who are we? The Mad Duo. Who are the Mad Duo you ask? Well, we'll tell ya. The tactical wit and trigger-pulling wisdom of Mad Duo is the amalgamation of several current and former military types, some still engaged in doorkickery, others just FAGs (Former Action Guys). They can be contacted here, over on Kit Up! or on Under the Radar. Swingin' Dick Kilgore and Slim Call are without a doubt the highest speed, lowest drag celebrities of the action figure and steely-eyed snaker-eater world.  Their commentary has been likened to a .308 op-ed to the head. They don’t like the Taliban, marplots, hippies, sissies, Keith Olbermann, Louis Farrakhan, traitors or SNCOs and officers who don’t grasp the concept of Noblesse Oblige. Loyalty starts from the top down, assclowns. Join 'em on Facebook if you're not skeert: www.Facebook.com/breachbangclear.