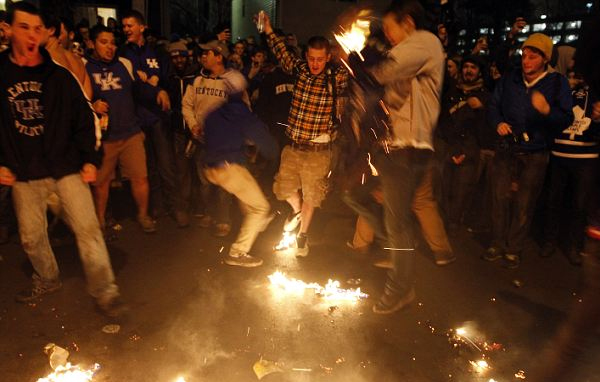 In an update of sorts, a Kentucky police officer sent this to Mad Duo Chris after reading the “White people are allowed to riot” essay. This officer has worked the so-called University of Kentucky Riots for the last several years and has a pretty interesting perspective. Apparently, the difference between Ferguson and Kentucky isn’t as simple as “cops love whites and hate minorities”. Mad Duo

Inside View from the Kentucky Riots

“This officer, who chooses to remain anonymous, is not a spokesman for any police department. Any opinions expressed here are his alone.”

I’ve been a Kentucky police officer for almost two decades. I’ve been deploying to watch over and protect rabid UK fans during post-game celebrations since Rick “The traitor” Pitino was the UK men’s basketball coach in the late ’90s. During the Tubby Smith era we had to grab our “hats and bats” for Sweet 16 and Elite 8 after parties a few times. We enjoyed a nice break from spontaneous street festivities for a few years while Bill Gillespie was stinking the place up, but since John Calapari took over we’ve deployed for the Final 4 (loss) in 2011,the Final 4 and Championship victories in 2012, and the Final 4 (win) and championship (loss) in 2014.This year we deployed for the Sweet 16, Elite 8, and Final 4.

We’re kinda used to it. 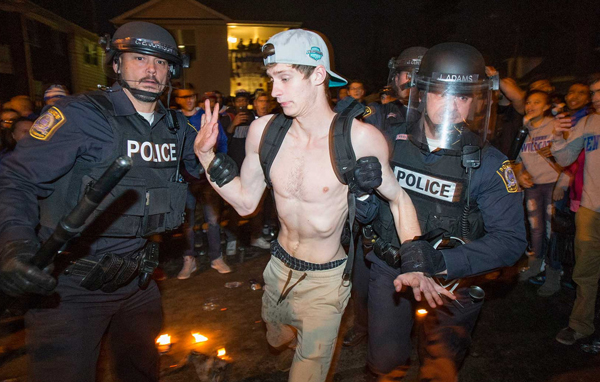 UK fan celebrations are technically riots, as one of the definitions for “riot” is “unrestrained revelry.” The picture presented by the use of that definition is a lot different then what happened over last summer in Ferguson. There’s some idiotic behavior, but by and large, people aren’t trying to hurt us or each other. We haven’t ever used actual tear gas on the crowds that I can recall. I figure the media is just stupid and doesn’t understand the difference between pepper spray and gas. The last two years, we haven’t even carried our gas masks with us until the championship game. How are we going to use gas on “rioters” when we aren’t even carrying our own masks? This year they even took all of the pepperball guns from officers due to some “friendly fire” incidents last year. Only the sergeants were allowed to carry them.

The dirty reality that the Daily Kos commentators and other socially-conscious types spoiling for racial disparities real or imagined will never admit is that the college kids (who are predominantly white but not exclusively so) are simply not the problem. They can be stupid and are most definitely drunk but they are not particularly violent towards us or each other. The criminal problems, the fights and disorders, the serious acts of vandalism, are almost exclusively caused by racially-mixed groups of local hoodlums as well as out of town gangbangers from Louisville and Frankfort. How do we know that they are hoodlums? We recognize them. For a city of 300,000, Lexington still has a pretty small town feel.

The frat boys might light a couch or two or more. They might set empty beer cartons or a single T- shirt on fire. They might urinate in public. But the guy who carries in a backpack full of T-shirts and trash that he’s constantly digging something out of, soaking in accelerant, lighting on fire, swinging recklessly around his head, and throwing carelessly into another part of the crowd? Hoodlum. The guy reaching up to actually try to grab the breasts of the coed sitting on her boyfriend’s shoulders, flashing the crowd? Hoodlum. The two crews that were bumping, taunting, and representing at each other all the way down the block at the end of the night before one of them pulls a gun and shoots another less than thirty yards from a squad of police officers (as happened in front of me at the end of the 2014 Final 4 celebration)? Visiting hoodlums from Louisville, in that case. 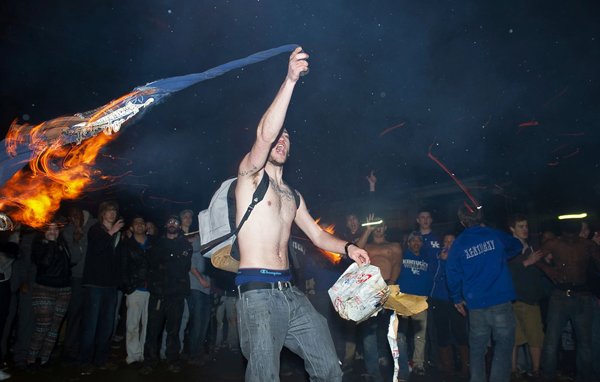 Ground zero for UK fans and their unrestrained revelry for the last few years is the intersection of State and Elizabeth Streets, which is a residential neighborhood a couple of blocks from UK’s campus (UK is a dry campus, so the kids have to stay off campus to drink). The after parties, whether they are after a victory or a loss, follow the same basic script. The game ends. Everyone rushes out into the streets. The crowd at first is made up almost exclusively of college kids who were watching the game at house parties up and down the street. It takes a little while for the hoodlums to walk in from wherever they were watching the game, but come they do. 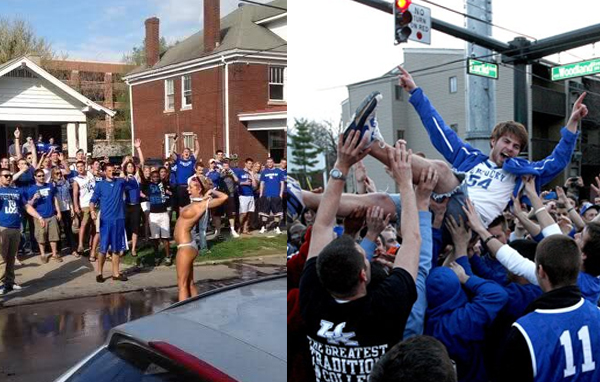 For the first couple of hours after a win, the crowd is happy. We take a lot of selfies with kids of all colors (so much for militarized police officers striking terror into the hearts of the populace; I personally must have taken over 50 pictures with kids, male and female, black, white, and other during the post-game festivities this year). For the first couple of hours after a loss, the crowd is… disappointed, but not terribly disorderly. This year there were a few thrown bottles early on, but officers nipped it in the bud pretty quick, often without having to make an arrest. 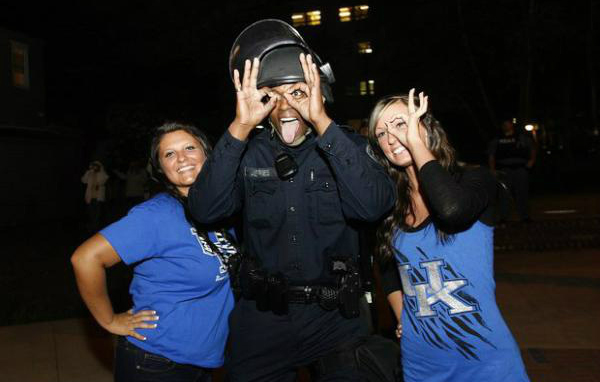 But after about two and half to three hours, win or lose, the crowd changes. The college kids have mostly left, either to go home because they have responsibilities the following day, or to walk downtown to the bars. The ratio of UK students to hoodlums looking for trouble shifts in favor of the hoodlums. That’s when the fights in the middle of the crowd start. That’s when the taunts start coming our way. There aren’t as many people looking for selfies with us and the ones that ask are smart asses about it. They’re trying to get you to hold a beer or they’ll throw gang signs right as the flash goes off. By the time the decision is made to call in the street sweepers and for us to disperse the last few dozen people out of the street, the people who remain are almost exclusively hoodlums.

So the story of UK post game “riots” is actually a story of two groups of people and two different types of behavior. The actual college kids, regardless of their race, really aren’t the problem. Yes, a few of them get drunk and stupid enough to catch a charge, but it’s generally towards the lower end of the scale. If someone gets hurt by their actions, it’s not intentional. The actual violence, the intentional acts meant to hurt somebody, are caused by the hoodlums. College kids throw empty bottles straight up in the air. Hoodlums throw them directly at other people, including the cops. 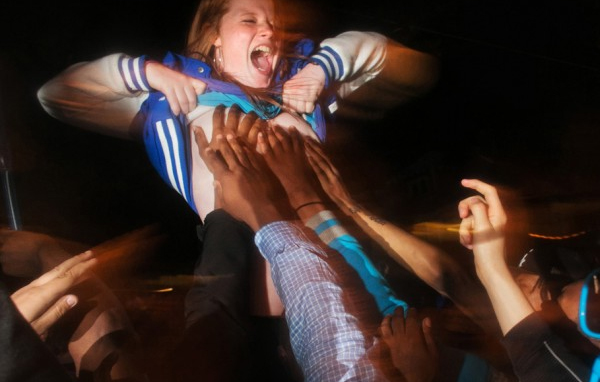 The worst act of socially unacceptable behavior that the college kids engage in exclusively that the hoodlums don’t, is celebratory couch burning. Couch burning is stupid, and dangerous and really upsets the fire department. But it’s not meant to hurt anyone.

Since 2012 we’ve gotten smarter as a department about handling the post-game celebrations. Frankly, we were caught a bit off guard that year. That was the last time cars got flipped and burned, during the post-game festivities after UK beat Rick Pitino’s University of Louisville Cardinals in the Final 4. We now make sure all the cars are off the street well before tip-off. We work with Code Enforcement to make sure abandoned couches are removed before the game. When there are about ten minutes left in the game workers from Streets and Roads come through and remove the street signs to keep them from being stolen or vandalized.

That’s the biggest difference between what happens at a college sports riot and Ferguson-style riot: We can plan. We know when the next NCAA tournament is going to be. We know where Ground Zero is going to be. We know roughly how long it’s going to last. And we know that the vast majority of people aren’t going to hurt us. All of this planning allows us to be much more patient and restrained when confronted with large crowds of very drunk people. 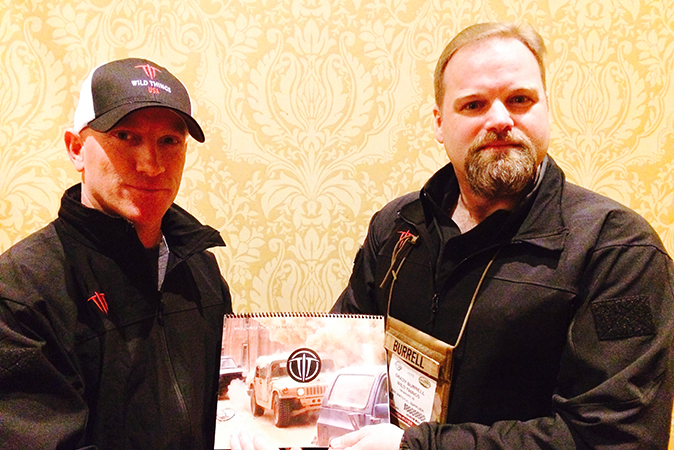 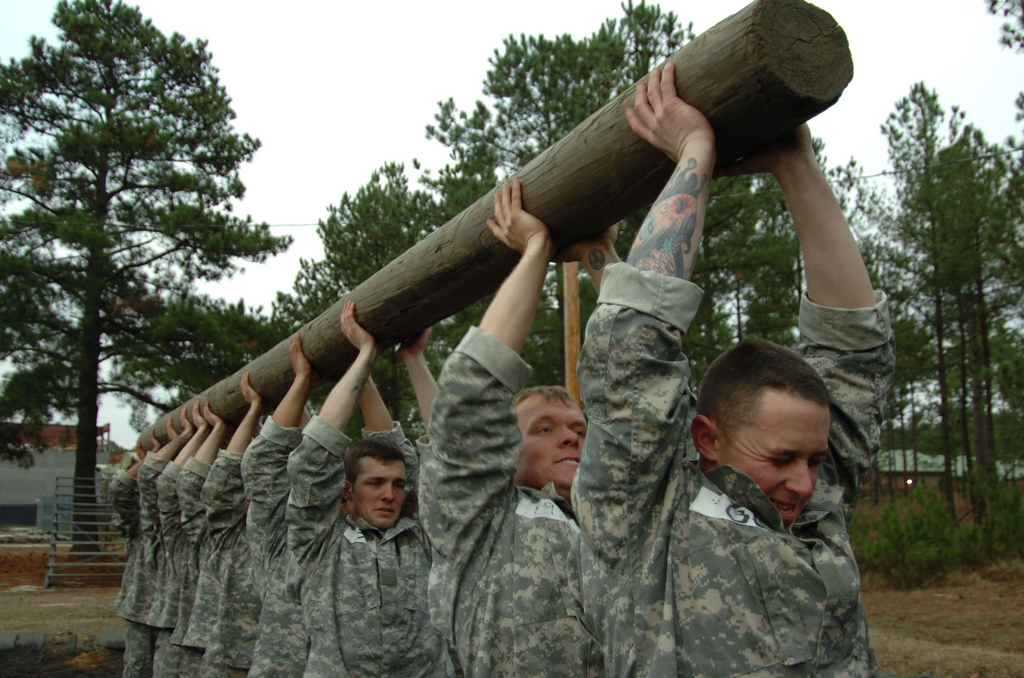 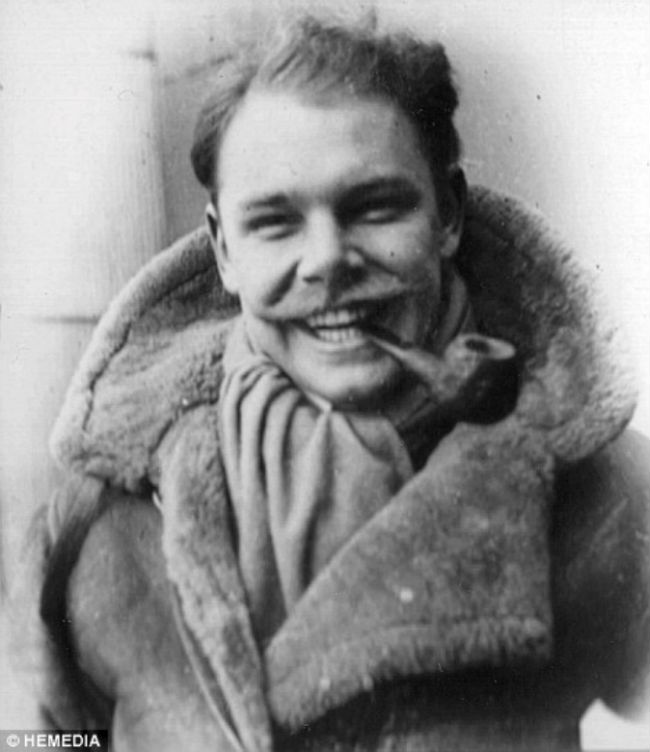 One of the last of Churchill's Few

One thought on “Inside View from the Kentucky Riots”