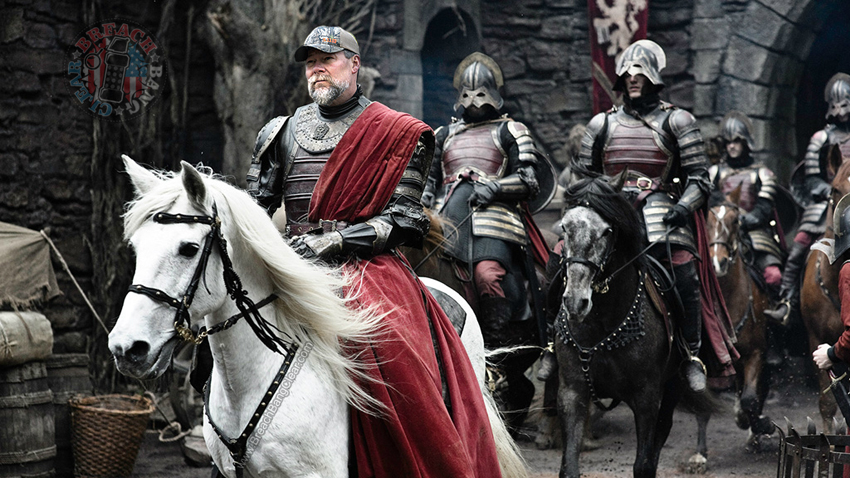 There are many Game of Thrones shirts out there, but damn few of them have machine guns, suppressed HK416s, frags and flashbangs, or frankly any other kind of proper doorkickery equipage. We figured we’d fix that.

Note: some of the imagery you’ll see below is from our original “Tactical Game of Thrones” series from back in 2013 – 2014. That was before we knew just how badly they were gonna fuck that show up, so bear with us. Most of them are people we know in “the industry” (meaning guns and tactical-stuff) and who we’d want ’em to play in a more kinetic/ballistic sorta Game of Thrones.

The Hound T-Shirt: Fuck the King

We have a couple of shirts related to House Clegane. The first one involves a machine-gun totin’ Hound in some far-off shithole getting ready to do some work. 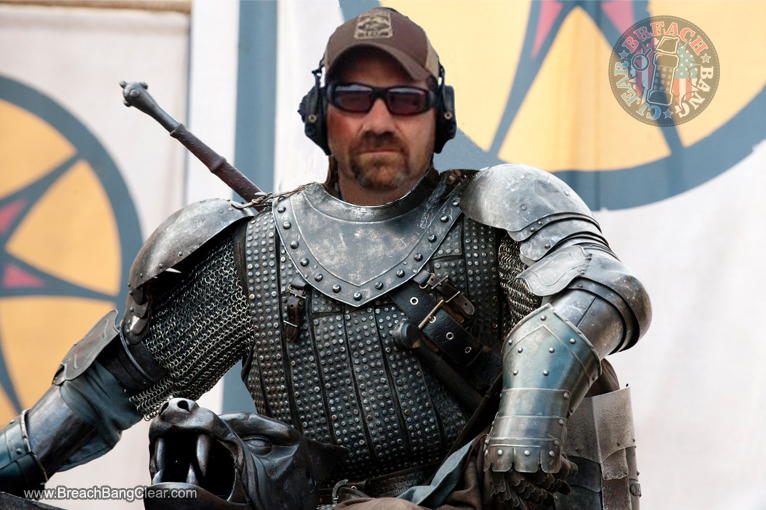 Today we’ll add a couple more characters to our Tactical Game of Thrones lineup. As you might recall from earlier, we’ve restarted the series, in which we cast people from the tactical/firearms industry as characters in the HBO series (not the book, mind you, unless we indicate otherwise). Tonight we’ll address one of the Cleganes, a  Mormont and one of those damned mercenaries serving Daenarys over in a place that looks like we ought to be running counter-insurgency operations and shooting people in the face (yeah, we stereotype much).  Mad Duo 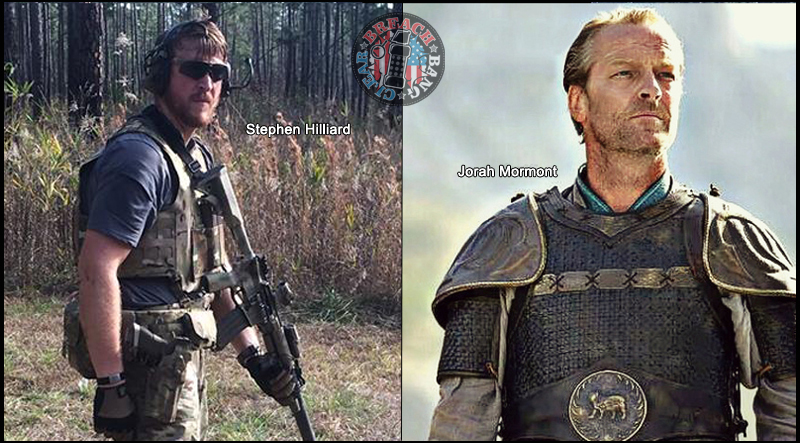 Jorah Mormont will be played by none other than Blue Force Gear‘s Stephen Hilliard. The Mormont character is probably a little older than Hilliard is, but they look more alike than our first choice, which was Ramsay Snow (the symbolism lies on several levels) – so, Jorah it is. The first knight of the new “Queensguard”, Mormont (like Stephen) spent many years wearing armor in hot, dusty places where people smell funny and it’s no fun to drop a deuce. Both are honorable men, both are good in a fight, have a knack for teaching other people how to fight and one of them kept his wank sock from his last OIF deployment as a souvenir (we won’t tell you which one). 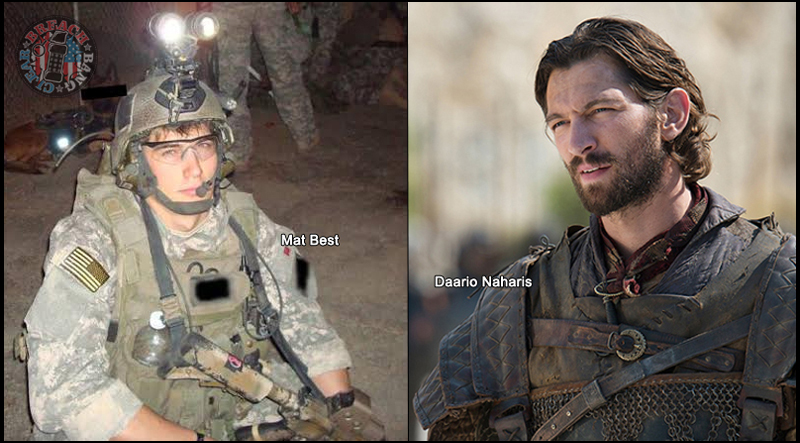 Daario Naharis is a Tyroshi sellsword who fights the forces of evil and darkness in the service of a desert queen. Mat Best (MBest11X) is a former member of the 75th Ranger Regiment who also fights the forces of evil and darkness in the desert. He doesn’t serve a desert queen, he is a desert queen. Both are snappy dressers with a great love of drinking wine, banging wenches and singing songs. Most importantly, Daario is trying to get Daenarys in the sack and get her panties off, which pretty much should be enough to make you understand why we think Mat should have this role.

Now, we don’t want this installment to be entirely negative, so we figured we’d end on one of the more dangerous characters in the book. Someone fierce and predatory, but with a hint of granola eating hippie – Oberyn Martell. Now, let’s be clear. We’re talking about the Red Viper from the books, not the one from the HBO series – at least not the ass bandit part. We’re casting the Oberyn Nymeros Martell we love, which includes being a bad ass on the battlefield but no peter puffery. Sorry – that just doesn’t serve our directorial vision. So, who can play a dangerous warrior who is fierce, predatory but somehow a little granola at the same time? Matt Griffin of Combat Flip Flops, that’s who.  He’s apparently heedless of danger amd has the required fierce look, great hair and falcate nose and there’s definitely some sort of treehugger in there screaming to get out. That makes him pretty much perfect for the role. 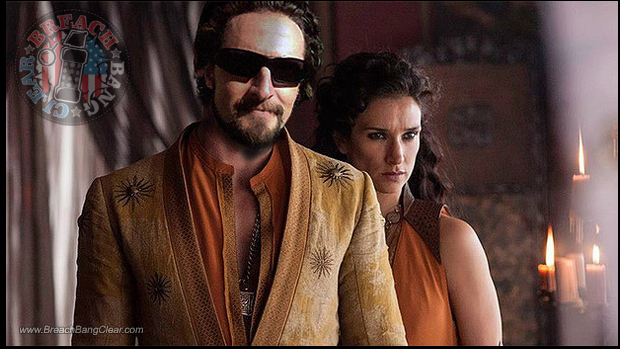 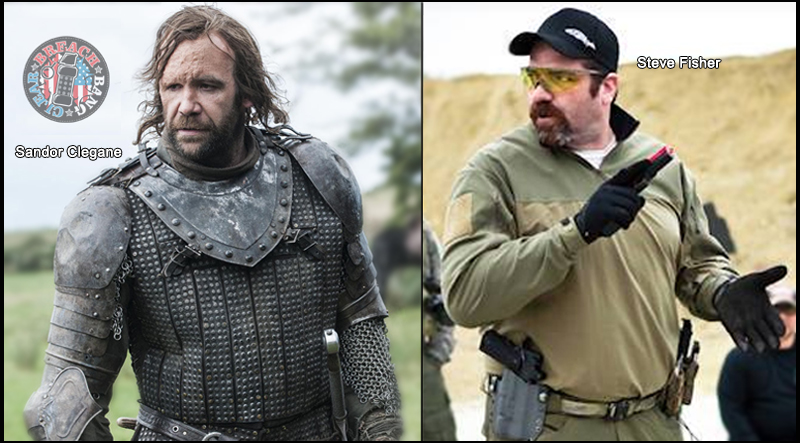 We had a helluva time deciding who Steve Fisher of Sentinel Concepts was going to play. We considered Hodor, then Brienne of Tarth, then (in a moment of inspired epiphany) considered casting him as the bear that Brienne fights in a pit for the amusement of the Bloody Mummers…in the end, though, Brienne was too nice and both the bear and Hodor too articulate. No one would have believed Fisher in that role so we went with the Hound. That’s right, Fisher will be playing Mountain’s younger brother. He’s big, gruff, good in a fight, enjoys beer, food, and cigars – why wouldn’t Fisher be suitable?

That’s it for now boys and girls. Hope you have a great weekend and don’t wind up in front of the First Sergeant, a judge or a doctor wanting to punch your bore tomorrow.

oday we continue our casting of the official Mad Duo Tactical Game of Thrones series, wherein we choose people in the firearms/tactical industry to play roles in the show. We begin with Cersei Lannister (who should be Cersei Baratheon, née Lannister shouldn’t she?). Now, if you’re familiar with the books, you know Cersei Lannister is described as beautiful and regal. That’s easy for us – we know women who fit in the industry who fit that description; just look at Hydrapak, Smith & Wesson, Grey Ghost Gear and some other places. Unfortunately none of those women are scheming, manipulative, creepy, unworthy of her power and position and crazier than a shithouse rat. So who fits that description?

Next we needed someone to play Joffrey. It needed to be someone both petulant and irritating. Some punk assed, haughty little jackass everyone loves to hate.

That was easy, and we’d already left the confines of the industry for one role, why not two? 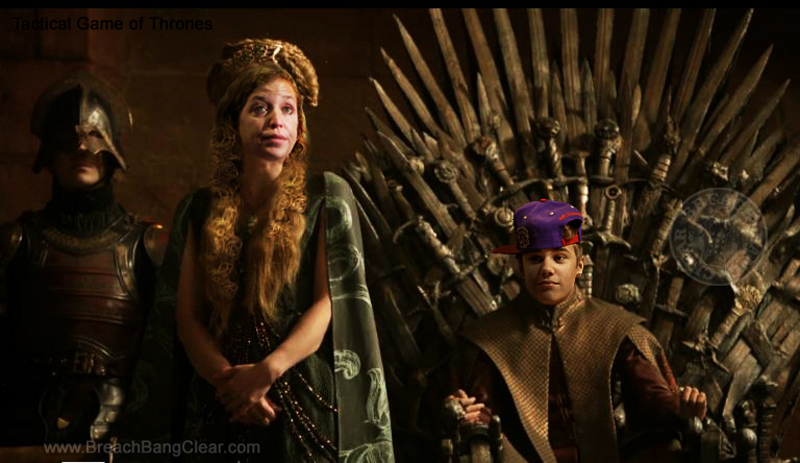 That’s right. Justin Bieber will be playing Joffrey in our series. He may have had some admirable qualities once, as well as potential.  His wealth and privilege turned him to fuckery however, and now we just want to smack the shit out of him.

For reasons previously articulated (and many too vile to post here on this hallowed blog) we figure the Chair of the Democratic National Committee is perfect for the rabid queen in Kings Landing. 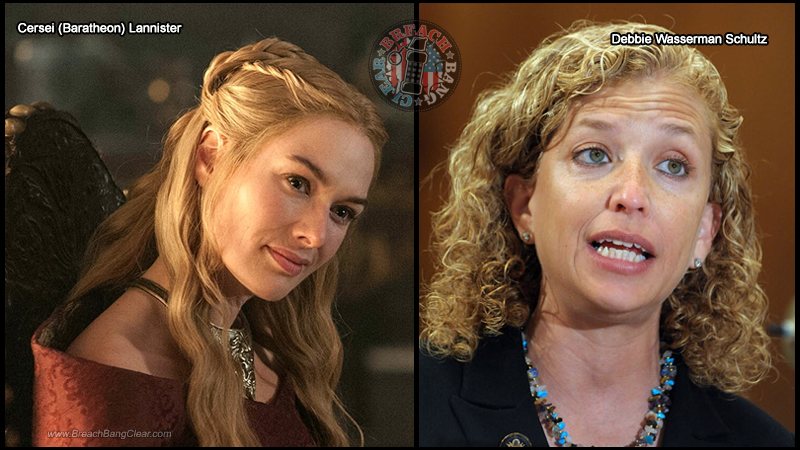 Here’s a look at the rebarbative little bastard who’ll play the boy king, spawn of incest and paragon of capricious cruelty.

In the meantime, in no particular order of importance (we may run House/political or regional specials later) here are a few more of the stars from the upcoming Breach Bang Clear presents: Tactical Game of Thrones. 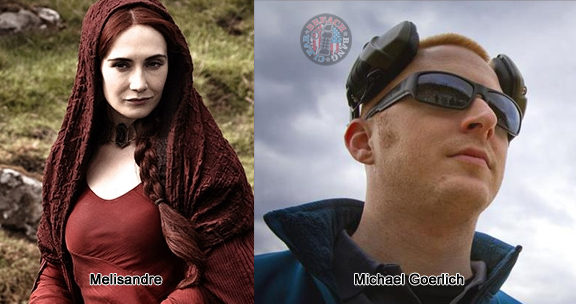 First, as Melisandre “the Red Woman” we have secured the classically trained acting skills of Michael Goerlich, HMFIC at Raven Concealment Systems. He was the obvious choice, for reasons too numerous to mention. Melisandre is a priestess of R’hllor and a Shadowbinder. Ruthless and cruel in her battle against the forces of darkness, she has taken the side of Stannis Baratheon not in the War of Five Kings but in the greater war of good vs. evil. She is described as having “…long hair the color of burnished copper and pale, unblemished skin…” Michael is a more than proficient tactical shooter and a Kydex-binder. He is ruthless and cruel in his battle against those who would defame or defile Cracker Barrels and he spares no pity for the foolishness of assclowns. Michael has short hair the color of…well, red hair and pale, unblemished skin. 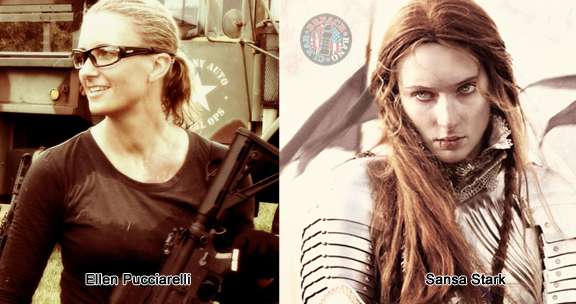 Next up we have cast our very own staff writer El P (frequent contributor to Fight Like a Girl) as Sansa Stark, eldest daughter of Eddard Stark and the darling of Winterfell. However, since Sansa was a bit too girly for our movie (and because it would be criminal to cast Ellen as Loras Tyrell) we decided to make Sansa a beautiful warrior princess with a penchant for slaughter. This will mean in our movie Sansa would kick the living shit out of King Joffrey and hack her way to freedom from King’s Landing, so there will have to be some story revision and poetic license…we’ll sort it though. 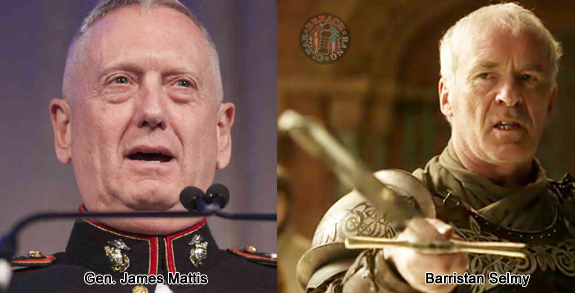 Who better to play Barristan the Bold than Gen. James “Chaos Actual” Mattis?  Squire of Manfred Swann, knighted by Aegon V, slew Maelys the Monstrous and was Lord Commander of the Kingsguard…his role fulfilled by the man who was in charge of one of the battalions of Task Force Ripper during the Gulf War, then later led I MEF and 1 MARDIV during the Iraq War and ultimately commanded CENTCOM. There isn’t anybody better, that’s the point. Granted he’s not “in the industry”, but YOU tell him he can’t be in our movie.

TGoT | The Mountain, The Bastard of Bolton and Samwell Tarly 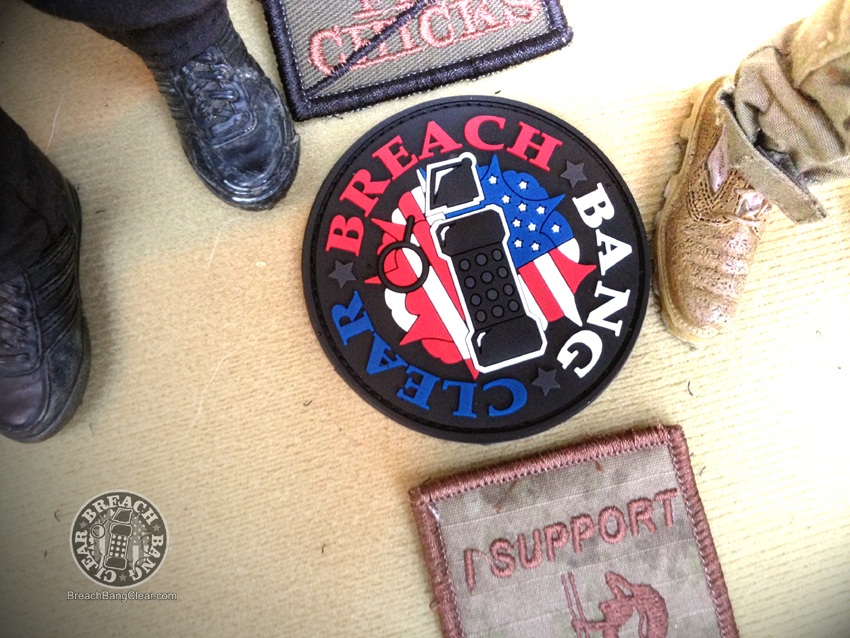 The Mother of Dragons is a Pipehitter