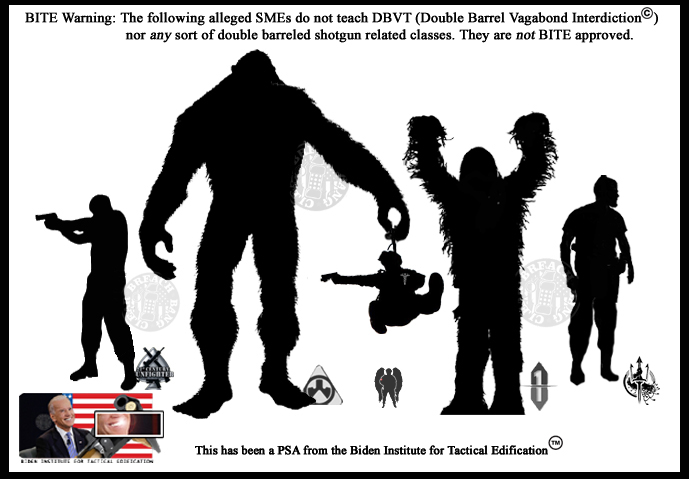 Steve Fisher, Chris Costa, Stephen Pineau, Matt Jacques, Kyle Lamb, Paul Howe, Kerry Davis, Super Dave Harrington, Rob Pincus, Jim Gilliland…there are a lot of good fighting instructors out there, and everyone has an opinion about them. Someday we want to train with them all, regardless of their respective backgrounds. What’s funny are the people who offer their derision and disparagement (grunts: disparagement) regarding instructors for reasons that make no sense at all (and rarely based on first person experience). It’s one thing to offer some sort of intelligent critical or opposing opinion that is grounded in experience, background and rational disagreement. It’s another thing entirely just to be a dumbass.

“That’s fake, no one shoots that fast and hits what they’re aiming at.” Really? Have you been to the range and observed this yourself? Because we have, and yes they do sling hate and ballistic discontent at that speed – and they hit what they aim at.

“He isn’t in good enough physical shape, who cares what he’s teaching.” Really? You’re a fucktard. He’s a little thick in the middle because he’s 15 or 20 years older than you and they took a chunk of his spine out after he was injured in the line of duty and nearly killed…how in the hell does that affect how he improves your skillset anyway? Idiot.

“He shouldn’t be teaching anything. He hasn’t killed eleventy-two people overseas.” Well, you’re right, that makes sense. No one who hasn’t killed lots of people should be teaching…which is why we should stop teaching fighter pilots to dogfight entirely (after all, we haven’t had an ace in decades) and why so few of our cops and soldiers had any skill at all between the invasion of Panama and the beginning of the fight in Afghanistan. That’s why we didn’t kick the shit out of AQ, the Taliban and the Iraqi Revolutionary Guard when we introduced them to the true meaning of American mean…

Point is, you should have some common sense when it comes to choosing an instructor, and you certainly should be willing to say something to their face if you’re willing to act the pundit on a forum or on Facebook.

You can dislike one or more, and certainly you can disagree with their TTPs, but have a grounded and intelligently explained reason for disliking them.

Now, though we don’t typically agree with any of the advice that comes out of BITE (the Biden Institute of Tactical Innovation) we try to be impartial and open minded. They recently published this warning in the BITE newsletter and it seemed incumbent upon us to share it.