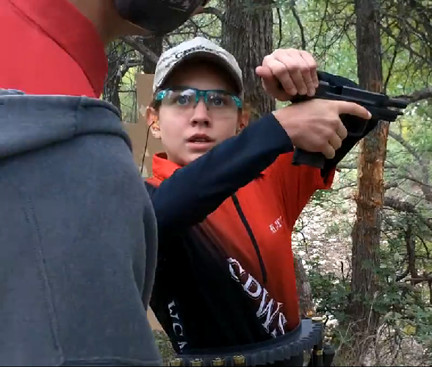 Remember our story about Katelyn Francis? We ran it about a month ago. Here’s an English paper she wrote. You’re gonna love it. This Missouri 13 year old 3-gun competitor is one of our heroes.

Everyone kept asking if I would post my English paper over the Assault Weapons Ban of 1994 but my dad said I couldn’t post it. Alot of people were asking if my school was ok with me writting about this subject, they are very supportive of my shooting and I’m very appreciative of that. My mom talked him into it so here it is:

The Assault Weapons Ban of 1994

In 1994 Bill Clinton approved an assault weapons ban. The ban was not just for assault weapons; it also covered any magazines holding 10 or more rounds of ammunition. It also banned guns that had certain characteristics. If you had any of the following things on your rifle, it was banned: bayonet mounts, barrel shrouds, folding or telescoping stocks, flash suppressors or barrels threaded to accept them, and pistol grips (Wintersteen). If your pistol had any of the following, it was banned also: magazines that attach outside the pistol grip, any semi-auto version of a fully automatic pistol, barrels threaded to accept extensions, suppressors, flash suppressors, or hand grips, barrel shrouds, and pistols with unloaded weights of 50 ounces or more (Wintersteen). If your shotgun had any of the following, it was banned: magazine capacities of five shells or more, folding or telescoping stocks, pistol grips, and detachable magazines (Wintersteen). So did the assault weapons ban of 1994 work? The facts will show that the ban did nothing to stop or even slow down violent crimes with guns.

The crime rates during the ban were not reduced. The last year the ban was in effect, 5.7 out of every 100,000 deaths were from gun related crimes (Lott).”We cannot clearly credit the ban with any of the nation’s recent drop in gun violence. And, indeed, there has been no discernible reduction in the lethality and injuriousness of gun violence” (Ban on Assault Weapons). In the study done by the U.S. Department of Justice, they found that “The ban has failed to reduce the average number of victims per gun murder incident or multiple gunshot wound victims”(Roth). This clearly shows that even with a ban on assault weapons, the crime rates did not go down. 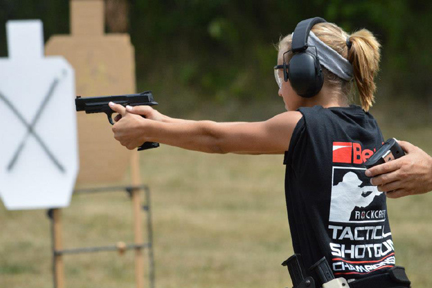 The government seemed very concerned with banning assault weapons for no reason. The government thought that assault weapons are big and scary because they have the ability to “spray” bullets everywhere and because they can hold a large number of bullets. Assault weapons are the same as hunting rifles. The government has done nothing to take hunting rifles away. Criminals hardly ever use rifles in crimes; they use handguns. You hardly ever hear about murders caused by rifles because they rarely happen and are very uncommon. Criminals do not use them because they are so big and hard to conceal. If there has been a decrease in the violence involved with guns, the change is so small that there is no point in measuring it because there will be little movement in the crime rates dealing with guns. Banning assault weapons does not make the world safer, the criminals are just going to use other guns (assault weapons). Only 2.6 percent of all murders are related to any type of rifle (Lott). During the ban, 1.5 million people privately owned semi-automatic ar-15s (Ban on Assault Weapons). If this many people owned ar-15s a criminal could easily get his/her hands on one (Plumer). With the guns being so plentiful, criminals still used mainly handguns.

Recently there was a shooting in Colorado at a movie theater. The shooter drove past several movie theaters in his area that were playing the same movie, The Dark Knight Rises. All of the theaters he passed allowed concealed carry of firearms. He stopped at the one theater that had a sign posted no firearms allowed. “With just a single exception, the attack in Tucson last year, every public shooting in the U.S. in which more than three people have been killed since at least 1950 has occurred in a place where citizens are not allowed to carry their own firearms” (Lott). Had some citizens been armed, they might have been able to stop the killings before the police got to the scene. Most of the mass shooting have stopped when either the cops showed up or an armed citizen pulled out his gun. In most of these cases the gunman had plenty of ammo left to shoot lots more people.

The facts have shown that the ban did nothing to stop or even slow down violent crimes with guns. The facts and statistics do not lie. Crime rates during the ban did not go down. Crime rates after the ban actually went down. The ban was pointless because criminals do not use rifles in crime anyway. Criminals go to gun free zones to kill. Criminals will always find a way to commit violent crimes. It is the criminal that commits violent crimes, not the tools they use.

Roth, Jeffrey A., and Christopher S. Koper. National Institute of Justice. U.S. Department of Justice. Impacts of the 1994 Assault. 1999. Web.