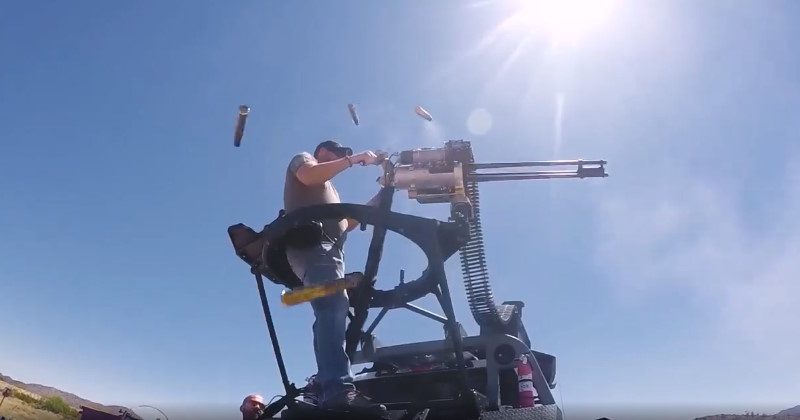 Arizona-based Dillon Aero has been in the Gatling gun game for years, making a name of itself as a supplier of some of the coolest rotary barrel machine guns in the game.

Beginning in the early ’90s, the family-owned company took the electrically-powered M134 Minigun and revamped it into a death-dealing monster, capable of unleashing over 50 rounds of 7.62 per second (or 3,000 rounds per minute).

Today, numerous special operations units use Dillon’s M134D in a variety of roles, including on MRAPs, helicopters, and special warfare watercraft.

Read More: How H&K dominated the Cold War with these machine guns

Fast forward to 2020, and Dillon’s upping the ante with the beastly 503D, a new machine gun designed to be “lighter, faster, and smarter than existing .50 cal machine guns,” or so the company’s site claims.

Unlike the reigning go-to .50 cal platform, the M2 heavy machine gun, the 503D takes the form of a multi-barrel Gatling gun, which almost doubles the system’s rate of fire to a blistering 1,500 rounds per minute (or 25 rounds per second).

According to Dillon, users of the 503D can adjust the system’s rate of fire based on the platform it’ll be used on, from boats to helicopters — and everything in between.

The system is also designed to be virtually immune to internal damage resulting from ammo feed jams.

It’s important to note that a heavy part of Dillon’s background with multi-barrel machine guns is centered around the company’s wizard-like abilities that managed to improve the overall reliability and resiliency of the Minigun platform and save it from the military retiring the platform altogether.

Without a question, the lessons they’ve learned in revamping the M134 will be applied to the 503D.

On its own, the 503D weighs around 84 pounds — virtually the same as the M2, though packing an enormously higher rate of fire. It can be mounted in a fixed forward-facing configuration, probably when in aviation-related applications, or be used as a crew-served weapon on a turret.

The gun is designed to have integrated immunity to internal component damage from ammunition feed jams. The current gun weighs 84 lb (38 kg).

Dillon states that the 503D has officially passed the Developmental Testing phase with endurance testing in progress. This means that if the program remains on schedule, the company’s .50 cal heavy machine gun on steroids will enter the Low Rate Initial Production phase in a matter of months.

The 503D will likely square off for government contracts against General Dynamics’ GAU-19/B, another multi-barrel .50 cal Gatling gun that offers similar specs and performance metrics, and can be applied across the same range of vehicles and platforms as Dillon’s new offering.