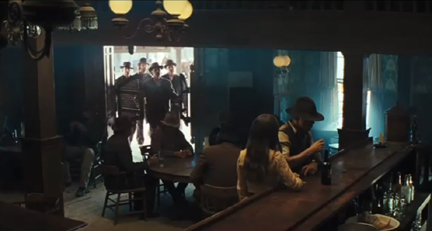 It's a little late for some of you, but we thought we'd post this review anyway. If you haven't seen it yet, you should consider Cowboys and Aliens.

Yep, we said it Cowboys and Aliens. The name alone told us it had to be outstanding or a new monument to movie suckage. Worry not, if you have high hopes for it. This flick is outstanding. You are not only cleared hot to watch, you are hereby directed to do so.

In the interest of full disclosure, we should make it clear from the outset we’re huge fans of Westerns. We like movies across the genre, from gritty films like Culpepper Cattle Company to classics like The Shootist. We went into the theater predisposed to dislike it. That was a mistake.

The movie begins with a quintessential Western air. It had everything but the whistling theme from The Good, the Bad and the Ugly. Daniel Craig (the outlaw Jake Lonergan) wakes up gaunt, sunburnt and mean in the arid Arizona wilderness and quickly goes to work demonstrating laconic badassery. 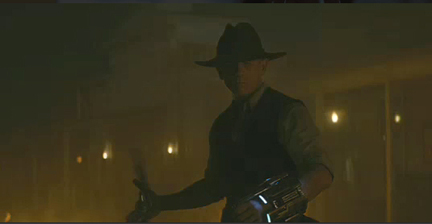 From there things do not disappoint. We meet the first of several excellent supporting cast members, including Clancy Brown as a rifle-toting preacher with cheaters on his nose, Sam Rockwell as the bespectacled saloon keeper and Keith Carradine as the dour but obviously Good Guy town Sheriff who is going to do what’s right even if it’s not in his best interest to do so. Soon after that we’re introduced to the leather-skinned, no mercy, hard-eyed sonuvabitch cattle baron that rules the town in all but name by dint of money—Harrison Ford as Woodrow Dolarhyde, a man with an utterly pitiless outlook on life who is coincidentally a former Army Colonel that survived Antietam with a scathing disdain for West Pointers. Even more good support characters pop up later on, like David O’Hara and Walton Goggins. They could have done a whole subplot with those two and we’d have been okay with it.

“No one calls me Colonel. Them that did are mostly dead.” Woodrow Dolarhyde

Oh, and there’s a pretty cool dog too.

We can’t really go into too much detail from there without spoilers, but it gets interesting fast and then never disappoints (though it does slow down some). There’s good use of suspense waiting to see what the aliens look like, first behind bloody curtains in town, then in an eerie location in the pouring rain. The movie has a surprisingly good soundtrack and (though admittedly confined to the standard Western tropes) good character development. We really enjoyed the way Dolarhyde’s callous exterior gave way to the ruthless but paternal hardass inside and back again. Gunplay is fast and loose, as one might expect in a Western, but it’s not over the top. Sixguns by and large have six shots and the double-barreled scatterguns, while effective, don’t pick people up and toss them through saloon windows. We liked that. The Indian tracker seemed like he could actually track, and pointed out that the aliens prints getting closer together meant it was getting tired. We liked that too. 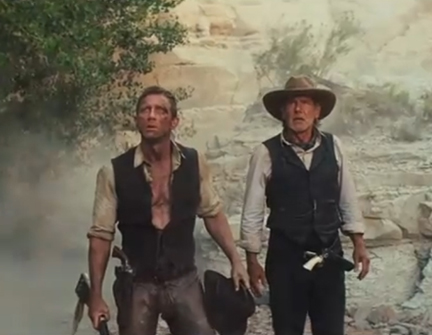 Going back to the gunplay for a moment, pay attention to the preacher’s advice on trigger manipulation when he’s teaching the saloon keeper how to shoot. If you’rea trigger-puller or a firearms instructor, guarantee you’ll use it.

There’s an excellent use of humor throughout the movie, deftly delivered at times with no more than a facial expression, quip or noise, but make no mistake. This isn’t a kiddy movie and it isn’t soft. It may not be as brutal as a Peckinpah film but it’s plenty bloody and a lot of people die. There isn’t much in the way of nudity, but if you’re taking kids be aware that you do have a see-through-the-wet-white-dress moment and one quick look at a bare rear end through the flames of a bonfire.

Overall Cowboys and Aliens a good storyline and good characters. At times the use of humor struck a slightly discordant note when gritty reality stepped back in but not enough to be unsettling. Other than that, sure, there are some improbabilities and inconsistencies, but…we are talking about a movie with desperadoes and Apaches fighting it out with 8’ tall four armed aliens here. If we were going to improve one thing, we’d like to have seen more of the supporting characters who had such…well, character.

If you don’t like this movie you’re either a hippie, a Commie or one of them silly bastards what thought the ACU and ABU were good ideas. That’s our take on it. You’re welcome. 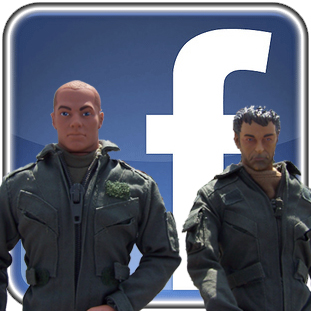