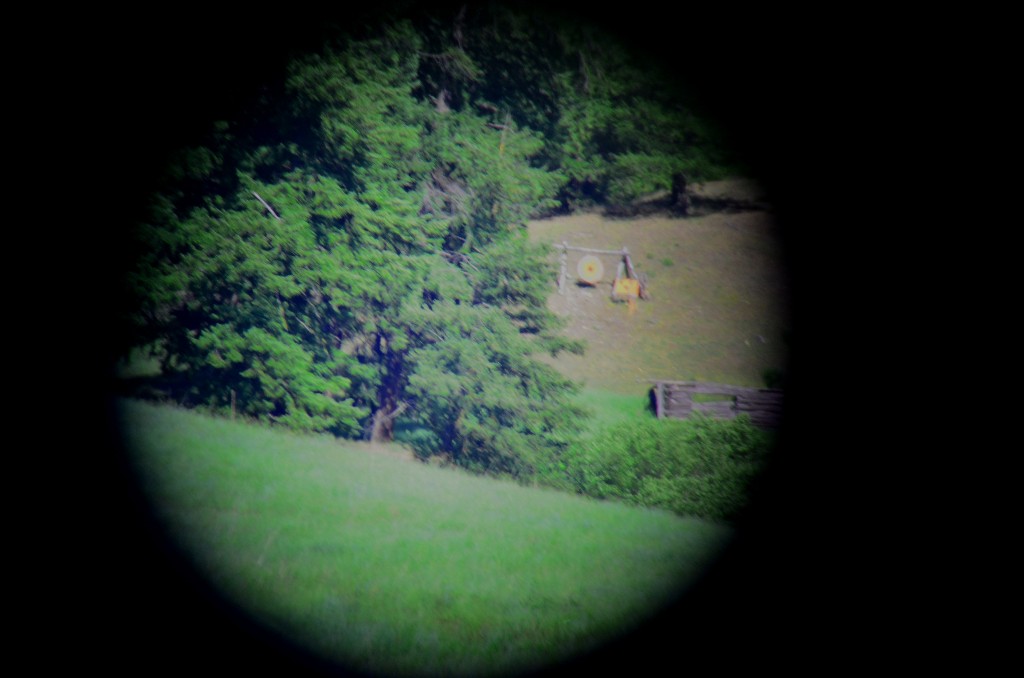 Today we’re going to walk through one man’s experience shooting from back at a cool grand; afterward feel free to share anything you’ve learned. Half our minions can’t even see that far, much less shoot it. This is an interesting story not just because he’s relaying what he did and how he got there, but because he’s from a place where shooting from 1,000yds is improbable at best. Mad Duo 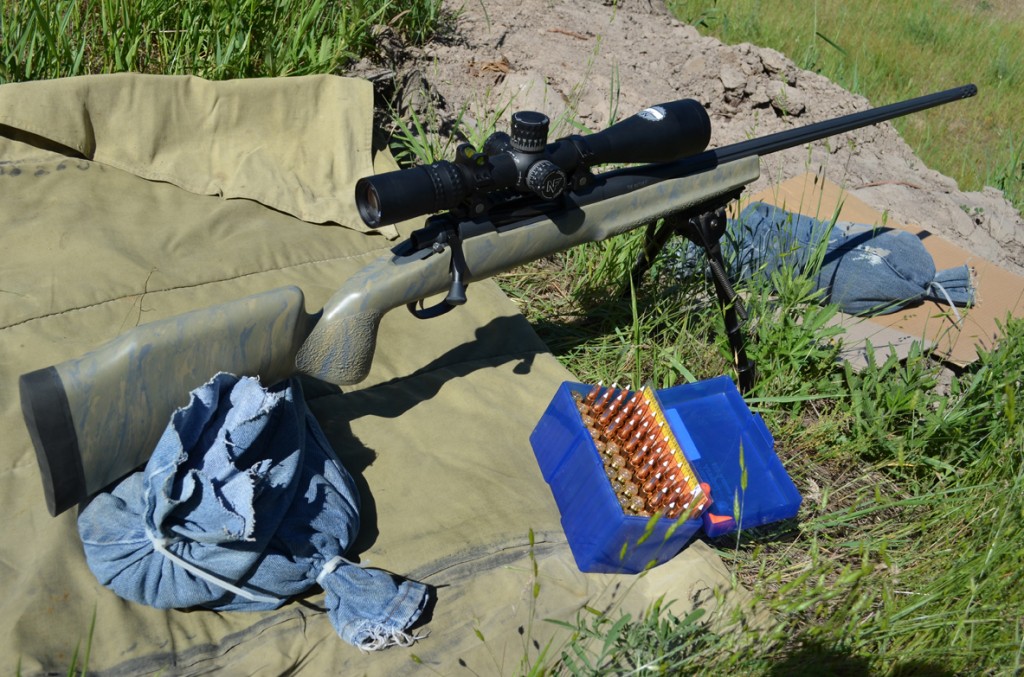 1,000 Yards with a Ballistic Savant

914.4 meters; the proverbial “fur piece.”  Although I’d never tried it myself, I always considered success at the distance (which is well over half a mile) to be the essence of marksmanship.

There’s an impressive list of military records from foreign conflicts, where our brave boys in camo combine skill, experience and technology to push the envelope for über-long distance target intervention.  To my knowledge, 2707 yards is the current best.  Looking at those numbers has a tendency to devalue the formidable 1,000 yard shot.  But let’s not get ahead of ourselves.

At a grand, a 150-grain spire-point bullet tossed from a .308 Win drops 43 feet (yes, feet) from the bore line.  A 10 MPH breeze can push the point of impact over 12 feet left or right.  That doesn’t address the influences of temperature, angle, dew point, altitude, mirage, gyroscopic spin drift, or atmospheric pressure.  Oh, and don’t forget about Coriolis effect.  You know, rotation of Earth under a projectile in flight.

All that aside, there are folks that don’t consider precision shooting at 1,000 too far out of the ordinary.  For them it’s just the “far target.”  But for an Easterner like me, it’s tough to find a place to safely stretch the legs on your favorite magnum.

Over the course of a couple trips to the Rocky Mountains, I got to shoot a few rifles made by Butcher’s Bull-istics, LLC.  These rifles made 400 yards feel like a chip shot.  Upon inquiring as to the builder, I was told to call Thom Butcher, the mastermind.

After talking to Thom on the phone, I learned he doesn’t just build guns.  At his shop in Thompson Falls, Montana, he also fine tunes factory rifles, develops custom loads, sets up scopes for long range shooting, and cerakotes metal components.

After a few more conversations, he graciously invited me to shoot with him and his son, Zach, who’s also part of the company.  Needless to say, I was all over it like a chimp on a jack-knifed semi truck spewing bananas across the interstate.

In June, my lovely wife and I flew west with the express purpose of shoo, er… hiking and visiting friends.  She was excited to see alpine lakes, view wildlife and soak in some hot springs.  I was too, and spent the duration of the flight from Philadelphia to Spokane with my nose buried in a tattered copy of Robert Rinker’s Understanding Firearm Ballistics, rereading the excerpts that I’d highlighted the first three times.

When I met Thom and Zach at a Conoco station on a gorgeous Sunday afternoon, they took me to a property that far exceeded what I had pictured as a “range.”  We went over a cattle guard, through a towering stand of Ponderosas and into a long, rolling meadow.   Three counties away, at the end of the meadow, there was an orange dot.

As we drove toward the dot, it became apparent that it was, in fact, a series of dots; various sizes of spray-painted steel plate.  As we got out of the vehicles, Zach said, “We’ll start at 400.” 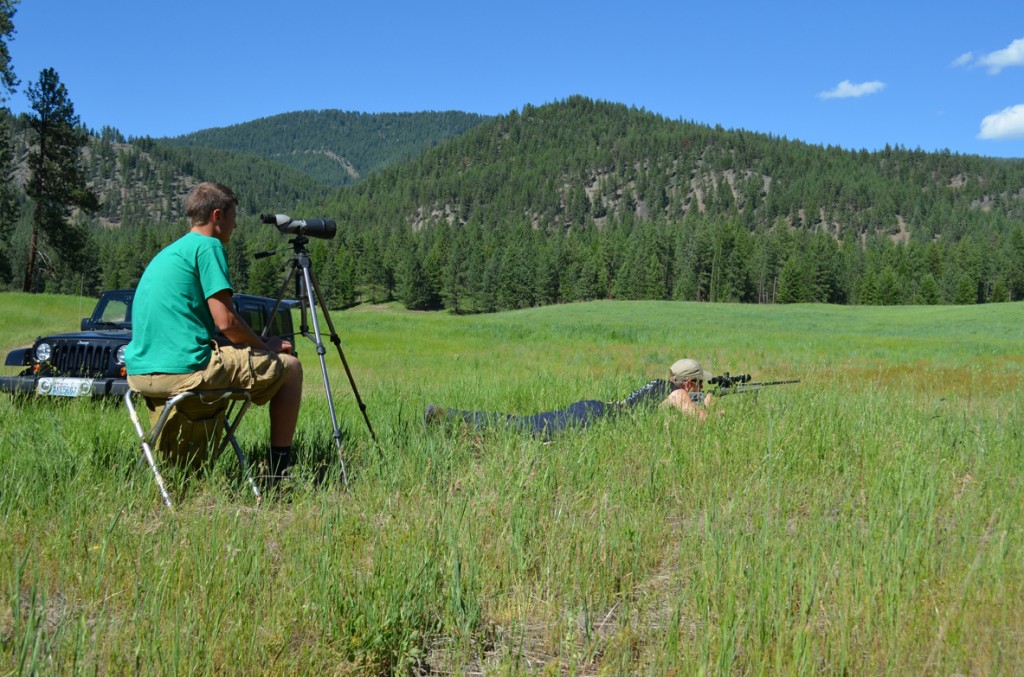 In the presence of giants

Now, I generally consider myself a decent shot – not stellar, but not too sloppy when I plug my head into what I’m doing.  I was pretty certain 400 yards wouldn’t be an issue, but when asked what my long range shooting experience was, I wasn’t about to eat a crow sandwich.

Humility is a virtue, but it’s especially valuable at times like these.

Thom was trained by one of the best shots in the country; his father, Bob Butcher.  Bob shot NRA master class, and captured Washington State Hi-Power Rifle Champion two years in a row.  In his father’s footsteps, Thom customized his first rifle in his early teens, and hasn’t let up since. His best three-shot group at 1,000 yards is 4.75 in., and two years ago, a 750 yard shot gave a Wyoming speed goat a nice, long dirt nap.

Zach, 31, is a walking ballistic calculator, an outstanding elk guide, and arguably the nicest person you’ll ever cross paths with. He and a friend shoot pie-plate groups at 200 yards with an open-site, factory .22LR loaded with junk ammo.  Freehand.

Having shot some of their builds, I knew that whatever was in the green Pelican case in the back of Thom’s rig would be a dandy.  But I wasn’t entirely prepared for what they pulled out.

At nine pounds including the scope, the gun is heavier than your average mountain rifle, but by no means an unmanageable bench-rest beast.  The action was as smooth as wet glass, and the two-pound Jewell trigger would ruin even the pickiest scotch drinking gun snob. 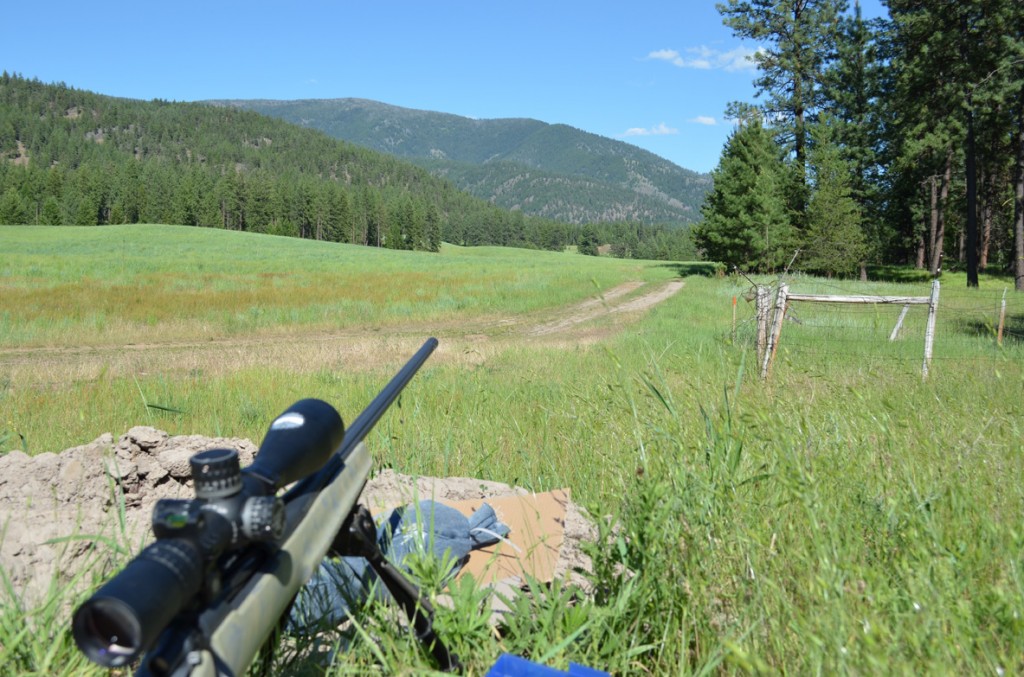 A dose of humility

The target of choice was a four-inch wide grader blade.  I pulled the first shot – a clean miss at 400.  No rebuke came.  Zack, from behind a Leupold Kenai spotting scope, simply said “Now you know how the trigger feels.  You’re six inches left of center.”

The big rifle’s recoil was far less than I’d expected.  The KDF muzzle brake does wonders.  The empty casing looked like it had eaten a 300 Win Mag for lunch, but the kick was less mule-esque than any 7 mag I’ve ever fired.

I worked the spiral-fluted bolt, got comfortable on the stock, and sent a second round.  The bullet threaded the bolt hole I’d aimed at.  A third and fourth round each rang the grader blade, the points of impact touching the bolt hole.  I was shocked at how accurate the rifle was.  Enough point blank ammo expended, we backed up.

With an 11 MOA adjustment for drop at 600 yards, it was much the same as 400.  That is – me whiffing the first shot, then the accuracy of the rifle proving itself.  This time though, I had an excuse.  While we moved vehicles and shooting equipment, an intermittent breeze picked up.  A five MPH wind from 9 o’clock meant a 1.25 MOA correction to the left.  After slapping the grader blade a few more times, we fell back another 400 yards.

Now at 1,000 yards, lying prone, I was scoping a target more than twice any distance I’d ever shot before that day.  Nearly three times the distance of my longest big game shot.  It was the moment I’d waited for, my holy grail for long range shooting.  The orange dots were again one, when viewed with the naked eye.

They told me to cease fire on the 6” wide grader blade, and direct fire at the 24” circular gong target.  At 400 and 600, the big RUM would’ve torn through the half-inch thick gong, so they save it for distances or calibers that won’t instantly turn it to Swiss cheese. 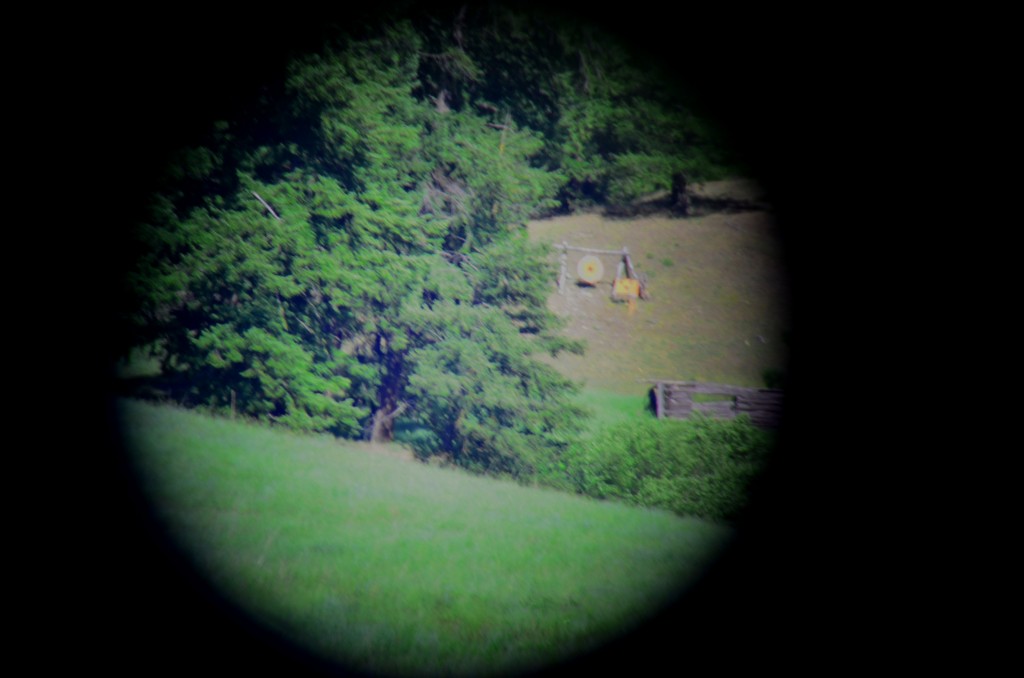 After giving the Nightforce 25 MOA for drop, and 2.25 minutes for wind, I again settled in behind the glass.  The slightest mirage came off the meadow, even though it was only 75 or 80°F.  As Murphy would have it, the wind was now inconsistent.  Swirling, gusting, and ceasing.

True to form, the first shot resulted in a puff of dust to the right of the target.  Thom corrected a few mistakes.  “Make sure your stock is resting solid on the back sandbag, and check your level.  It’ll make a difference now.”

After running the action again, I lumped up the sandbag, put my cheek on the stock and worked it into the bag until the rest was solid, holding steady on the bullseye.  A quick look at the bubble level – which is built into the rear scope ring – and the safety came off.  I talked myself through the shot.  Breath in. Breath halfway out and hold.  Finger on the trigger, smooth pull.  Let it surprise y…  WHOOOM. 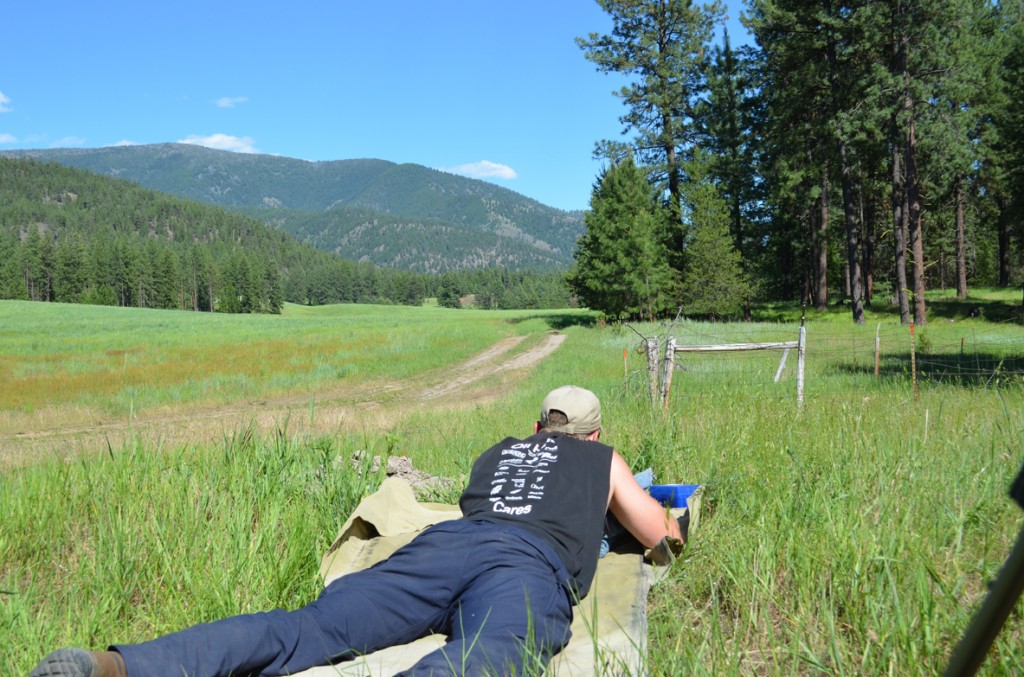 It took 1.4 seconds for the bullet to reach the steel, and an additional three seconds for the gratifying SMACK to report.  That was the moment I’d so eagerly anticipated.  I couldn’t help but laugh, chamber another round and do it again.  Zach took a turn, promptly placing a black scar three inches from the bullseye.  While he did, I took the opportunity to look through the spotting scope and watch the vapor trail arch towards the orange disc.

After letting the barrel cool, I sent two more.  For the first shot, I kept my head, watched my level and breathing, and rang the gong.  By the time I took the second shot I was having far too much fun and threw caution to the wind.  The last round resulted in a show of dirt. 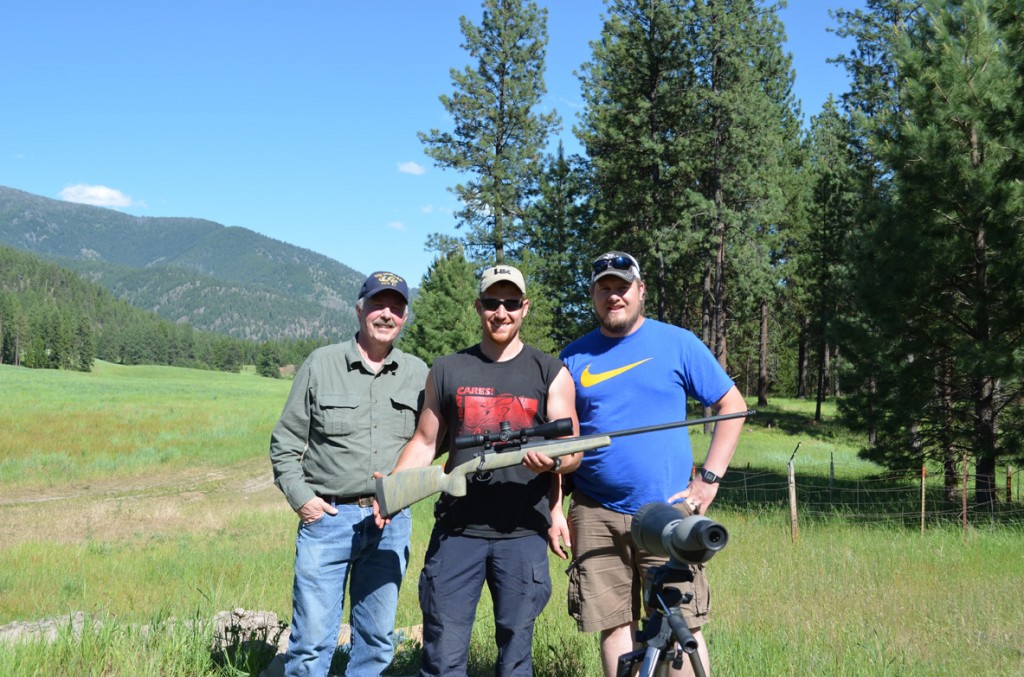 As Zach proved with his shot, the rifle’s accuracy is mildly ridiculous.  From a bench, in optimal conditions, and with the right guy at the trigger, it’s a true half-MOA tack driver.  That’s saying something for a rifle that can still be manageability packed on a hunt.

Dan Vastyan is a professional and freelance writer, who has hunted the better part of these beautiful United States. He is just about the sharpest woodsman the Mad Duo knows, and has covered a diverse array of subjects as a Mossy Oak Pro staffer, and as a humble outdoorsman. The kid can rock an AR-15 as well as he can a .300 mag guide gun, and often competes in 3-gun matches when there isn’t something covered in feather or fur that needs shot. 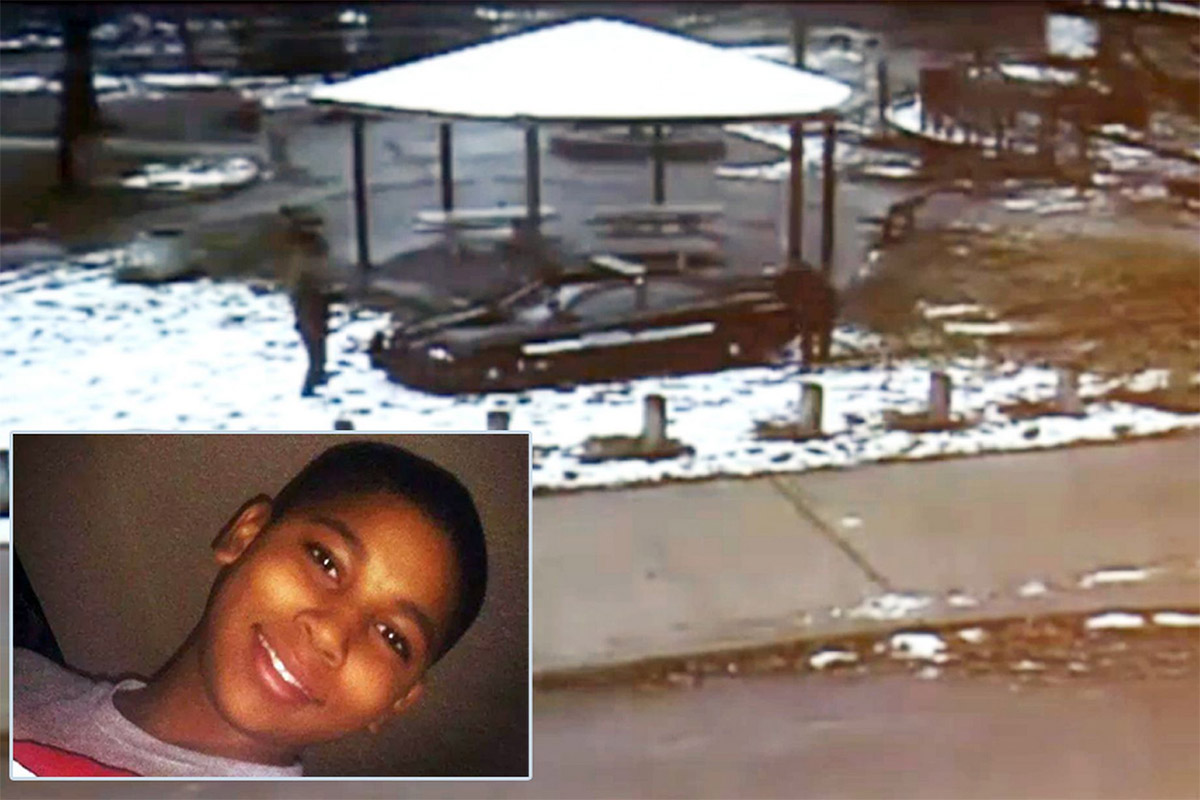 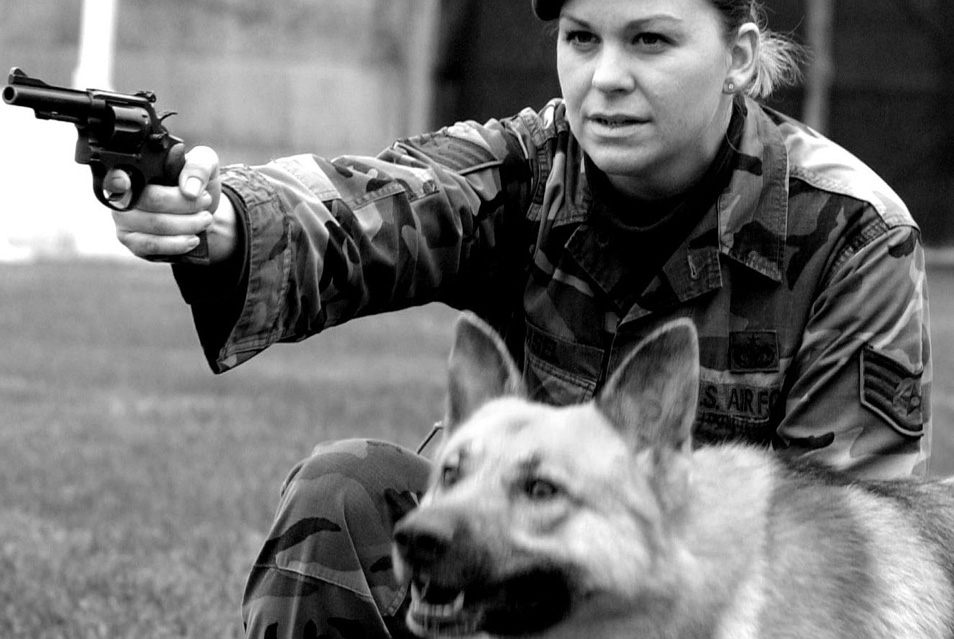